Ambassador Chuluunhuu conveyed the greetings of His Excellency Mr Tsakhiagiin Elbegdorj, the President of Mongolia, and highlighted the state of diplomatic relations and cooperation, which are remarkably spanning for 40 years.

The Governor-General underlined that Mongolia and New Zealand have much in common, such as focus on agriculture and added that people-to-people links between the two countries are important for the bilateral cooperation. 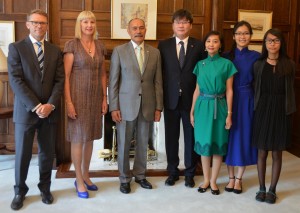