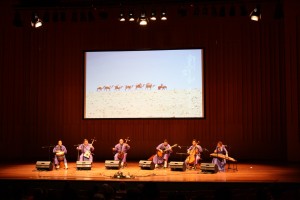 The Embassy of Mongolia in Australia, the ANU Mongolian Institute and the Mongolian Community Association in Australia have organised the live concerts by the Khusugtun band in Canberra and Sydney on the 1st and 2nd of December 2015 respectively. The “Khusugtun” ethnic ballad band of Mongolia is the Grand finalist of the 2015 “Asia’s got a talent” regional competition.

These concerts are part of the Australia and East Asian promotional tour of the band, supported by the Ministry of Foreign Affairs of Mongolia; and co-organised by five Embassies of Mongolia in the region – Australia, Singapore, Indonesia, Vietnam and Laos. The events went under the umbrella of Mongolia’s soft diplomacy, promotion of Mongolia abroad; and strengthening of people-to-people ties as well as cultural exchanges between Mongolia and Australia.

In Canberra, more than 250 guests, including Members of Australian Parliament, representatives of DFAT and other governmental organisations, members of the Diplomatic corps, Mongolians in Canberra as well as general Australian public watched the concert, which took place at the Llewellyn Hall, ANU.

The Sydney concert was attended by more than 350 guests, such as the Dame Marie Roslyn Bashir AD, CVO is the former and second longest-serving Governor of New South Wales, representatives of state institutions and NGOs, Australian friends of Mongolia; as well as Mongolians, who live in Sydney. The concert took place at the Factory Theatre, Sydney.

The performance by the Khusugtun band was first of its kind in Australia.