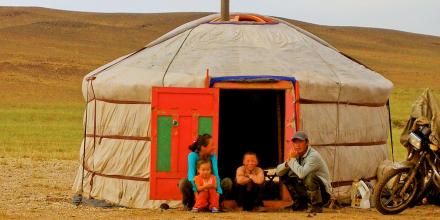 Mongolian family sitting in front of their ger

The theme for the 2021 Mongolia Update is Health and Wellbeing. Presenters will provide a scholarly, non-technical perspective on psychological and spiritual responses to both health and wellbeing.

Given the current COVID pandemic is at the forefront of our collective minds, the theme for the second installation of the Mongolia Update focusses on health and wellbeing. In these times it is easy to forget the wide range of other health and wellbeing issues that confronts us. Within this second Update, these presenters provide a scholarly, non-technical perspective on psychological and spiritual responses to both health and wellbeing.

This event is organised by the ANU Mongolia Institute in collaboration with the School of Culture, History and Language and the Embassy of Mongolia in Canberra. Funding was provided by the ANU College of Asia and the Pacific.

OPENING by the Ambassador for Mongolia in Australia

STATE OF SOWA RIGPA IN MONGOLIA

FROM CONSCIOUSNESS TO HEALTH

KEYNOTE: Enlightenment, Breath and the Anthropocene: Mongolian buddhism in a time of environmental disarray.

STATE OF SOWA RIGPA IN MONGOLIA

Khambu Lama, Damdinsuren Natsagdorj, graduated from the Mongolian Buddhist University and National University of Mongolia. He was also trained at the Tibetan Medical and Astro Institute, Dharamsala, India. Upon returning from India he founded the Mongolian Buddhist Medical School Manba Datsan in Ulaanbaatar in 1991. Khambu Natsagdorj set up a herbal medicine factory attached to the medical school and has been a significant contributor to the revival of Traditional Mongolian Medicine (TMM). He has been invited to participate in international conferences and health workshops and also also published widely on Mongolian traditional medicine.

The Ministry of Health issued an order to provide health care services to the population based on humanitarian, compassionate and scientific methods of modern and traditional medicine. Our team of doctors from Manba Datsan Traditional Mongolian Medical Hospital was commissioned to treat Covid-19 with traditional medicine at the Central Military Hospital of Ulaanbaatar, Mongolia, and successfully implemented it. During this period, a total of 65 patients, who presented mild and severe COVID symptoms were diagnosed by traditional methods. Herbal medicines were selected based on the patients’ symptoms, course of disease, individual characteristics, and underlying conditions. The results of traditional treatment were effective, with patients’ symptoms reducing on average between 5 to 9 days. The results of this treatment of Covid-19 using traditional Mongolian medical methods was 100% effective.

FROM CONSCIOUSNESS TO HEALTH

Urgen Tangut, is an extraordinary healer and a committed Zen practitioner living in Inner Mongolia. When he was nine years old, he was electrocuted by a high-voltage shock for more than 40 minutes. He was rescued and miraculously survived. This extraordinary experience led to a strong research interest in the relationship between human consciousness, energy matters, and how electrons can be controlled by the strength of the human mind. Working with recognised experimental scientists, he has been exploring the amazing potential of human consciousness. He is a proponent of a new field of study: the links between the invisible human consciousness and visible materials. He is also an inventor of several medical patents.

KEYNOTE – Enlightenment, Breath and the Anthropocene: Mongolian Buddhism in a time of environmental disarray.

In Mongolia’s capital city, Ulaanbaatar, the murky and obscuring nature of the city’s chronic air pollution is a physical constant of the long winter months. Air pollution intimately influences urban lives in Ulaanbaatar, not only through the bodies that breathe the particulate saturated air, but also through religious practices and the city’s psychological underpinnings.

Air pollution marks the boundary between what is considered to be the physical and the immaterial. It insinuates itself into all parts of the city, yet ultimately eludes capture and control. It is precisely this lack of clarity, its ambiguity or fuzziness, which makes pollution resonate powerfully within the minds of Ulaanbaatar’s residents.

As the dirty air blocks access to breath and light in the city, air pollution is believed to reflect broader cosmological, economic and moral obscurations. This talk will investigate how the desire for purification and light in Ulaanbaatar relate to contemporary Mongolian religious practices.

Dr Saskia Abrahms-Kavunenko is an anthropologist and the author of Enlightenment and the Gasping City. She has published on the topics of Buddhism, shamanism, postsocialism, economic anthropology, global warming and pollution, and materiality in Mongolia and India. Dr Abrahms-Kavunenko is dedicated to the role of anthropologist as co-communicator and collaborative agent. Her work is situated at intersections between environmental changes and cultural praxis, in multi-scalar and trans-species contexts.

REGISTER for both the morning and afternoon sessions on Eventbrite.